Why we don't do tours during full moons.
Some non-astronomy things we've seen during tours.

Why we don't do tours during full moons

(unless there's a lunar eclipse that evening)

So you've been looking at our tour calendar for a public tour that's not booked out.
Or you're wanting a private night sky tour for your group. Or a private tour at some other location.
And then you see it, there in our tour calendar, an interval of 6 or 7 consecutive nights when Nobody Has Booked A Tour.
So you're thinking...

PERFECT! WE'LL BOOK ONE OF THOSE NIGHTS!!

There's a very good reason for that interval of no bookings -- the full moon. Its light blots out almost everything else we want to show you during our tours. Such as the Milky Way. And every other galaxy. And nebulae. And most star clusters. And the thousands of stars you would be able to eyeball if that bright moon wasn't there, ruining the experience. Just compare these two photos, taken before and after a bright moonrise in the Australian Outback...

We've confirmed our decision with calculations of the number of stars you could eyeball at our Wirrina Cove tour during various moon phases. This is based on our measurements of the tour's night sky brightness over many years at various moon phases, together with the apparent brightness of every star visible from our latitude. And we've done similar measurements for Adelaide city and Adelaide's outer southern suburbs. The results are graphed below.
For comparison we've also added moonless-night star numbers for Wirrina Cove and for the Ikara-Flinders Ranges National Park (an iconic we-can-see-zillions-of-stars-out-here Outback holiday destination). 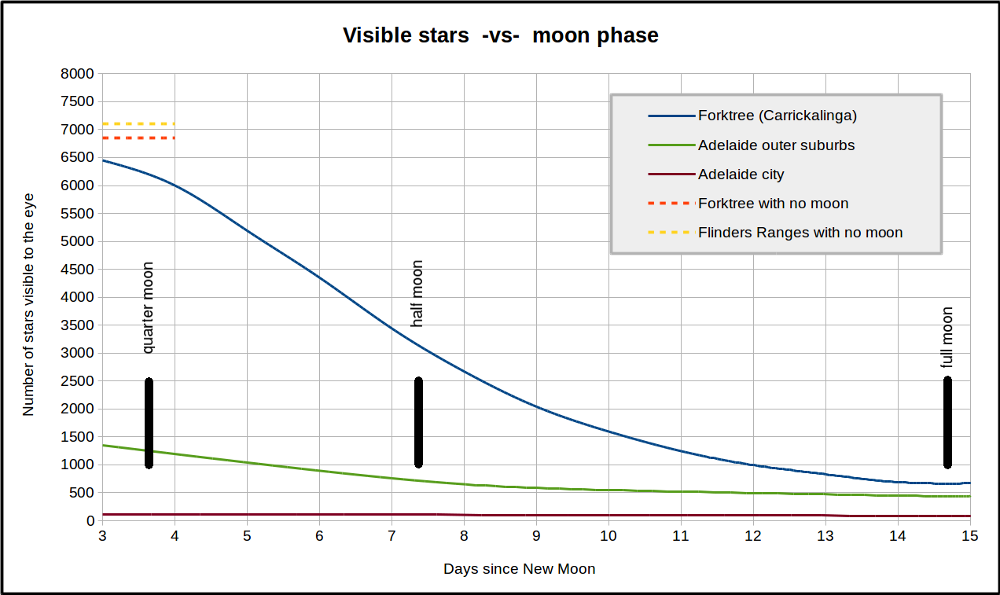 As expected the moon phase makes almost no difference to the view from Adelaide city because there's so much light pollution there already. Not just from the city centre but also from the ~1 million residents and ~200 thousand street lights in the surrounding Adelaide metropolitan area. The moon phase has more of an effect in Adelaide's outer suburbs. But even there the view on a moonless night is no better than Wirrina Cove's view during a 3/4 full moon. So we decided if you're going to be travelling from Adelaide (or McLaren Vale or Victor Harbor) to do our tour, the least we can do is schedule it for an evening when you can see more stars here than you can from the suburbs.

And note that on moonless evenings at Wirrina Cove you can eyeball practically the same number of stars as you can from the Outback.

During most years we don't run tours throughout the Easter long weekend, because the date of Easter Sunday is controlled by a full moon. Specifically, Easter is the first Sunday after the first full moon that occurs on or after March 21. But if that full moon occurs on a Sunday, then Easter is the following Sunday. Unfortunately the Christian churches use an ecclesiastical -- not astronomical -- moon calendar which consists of 29 day and 30 day months repeating on a 19 year cycle. For a longer explanation of this calendar's history and its Easter date calculations, see Wikipedia. The ecclesiastical calendar doesn't correspond exactly to the astronomical times of moon phases. And it doesn't account for modern time zones.

For example the 2019 ecclesiastical calendar lists full moons on March 20 and April 18. In Australian timezones the actual astronomical full moons occurred on March 21 (at 12:12 Adelaide time) and on April 19 (at 20:42 Adelaide time). So an astronomical interpretation of the 2019 Easter date for Australia would start from the Thursday March 21 full moon, and pick Sunday March 24 as Easter. But the ecclesiastical calendar used its Thursday April 18 "full moon" instead and picked Sunday April 21 as Easter.

In 2021 the (astronomical) full moon occurred 6 days before Easter so we were able to schedule tours throughout the weekend that year. But most years we're not that lucky; for example in 2022 there was a full moon on the Easter Sunday and we lost the entire long weekend.
To cure this problem forever, we reckon Easter should be redefined as the second Sunday after the March full moon -- which would ensure moonless evenings and tours throughout every Easter long weekend 🙂
return to top of page

In order of decreasing altitude:

return to top of page